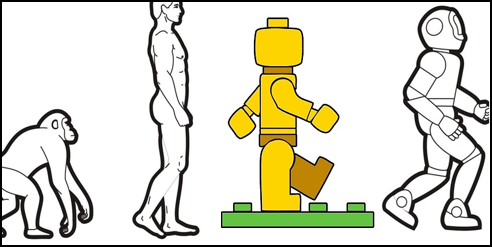 “Play is the highest form of research.” A. Einstein

It is known that for many, “playing” in organizations is still a myth and a scenario not seen with the best eyes; especially when the game is presented to develop the company’s strategy or to make the important decisions that will take them to the next level. Some more evolved markets, such as Europe or Asia, accept new and disruptive proposals like LSP better, but in Latin America the story is very different; and although it is changing and evolving rapidly and with excellent results, the typical 80/20 meeting is still used.

But we’re not going to talk about the markets and their behavior; let’s talk about PLAY! (Seriously, of course).

Throughout history, man (homo) has been cataloged in different ways taking into account his evolutionary skills:

And from Homo sapiens also derive some classifications:

It is interesting to see how within the varied evolutionary stages of the human being, there is one denominated HOMO LUDENS (MAN WHO PLAYS); and it’s about this that we’re going to talk.

This concept and/or theory was developed by the Dutch professor, historian and theoretician Johan Huizinga in 1938, and aims to point out the importance of the game in the development of humans in social and cultural terms.

As we already know, LSP is supported by theories such as Constructivism (Piaget) , Constructionism (Papert) and Flow (Csikszentmihalyi) , but they must be taken into account solid concepts as that of Huizinga and that of his predecessor Lev Semyonovich Vygotsky (1924) (and in my opinion include them as part of the LSP SCIENCE).

Vygotsky proposes that the game is an activity of a social nature, in which, thanks to cooperation with others, people achieve roles that are complementary to one’s own; and In addition, he points out how the individual who plays transforms objects and converts them in his imagination into others that have a different meaning for him.

Having said that, then the game in corporate / business environments is very relevant, since they are composed of social individuals who have in their DNA the play as a key piece of their cognitive development.

We play as a way to obtain pleasure through the compensation of certain needs:

• Achieve a status within the community

• Exposing ourselves safely to different challenges

• Enjoy some “rules of the game” agreed or accepted by all participants (this gives us a certain order and structure in an environment that we perceive as our own).

Today we move in changing environments that go on a dizzying speed with all the new technological changes, new products, the new generations and their not conventional behavor, etc.. so, return to the basics is a way to connect with our deepest self, and from there,develop differentiating knowledge.

Slow down, stop and back to basics (play) can be the route that takes us to a real change that contributes to the evolution of the HOMO; and before arriving at the Homo Cyborg or the Homo Cosmicus, we can include the HOMO LEG GODT (HOMO LSP): MAN WHO PLAYS WELL!